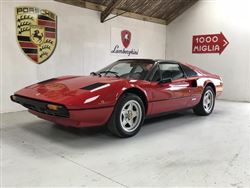 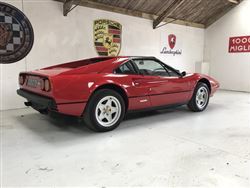 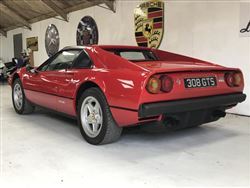 The 308 had a tube frame with separate body. The engine was a V8 of a 90 degree configuration, with belt-driven twin overhead camshafts per cylinder bank. It was transversely mounted in unit with the trans-axle transmission assembly, which was below and to the rear of the engine's sump. All models used a fully synchromesh 5-speed manual and a clutch-type limited slip differential. Suspension was all-independent, comprising double wishbones, coaxial coil springs and hydraulic dampers, and anti-roll bars on both axles; four wheel vented disc brakes were also fitted. Steering was unassisted rack and pinion.

The 308's body was designed by Pininfarina's Leonardo Fioravanti, who had been responsible for some of Ferrari's most celebrated shapes to date such as the Daytona, the Dino and the Berlinetta Boxer. The 308 used elements of these shapes to create something very much in contrast with the angular GT4. GTS models featured a removable roof panel with grained satin black finish, which could be stowed in a vinyl cover behind the seats when not in use.

Built in 1979, this 308 GTS was delivered to its first owner by Cressman/Baumgarten Ferrari, Fort Lauderdale, Florida, in April 1980. It was then imported from Savannah, Georgia in 2014. This Ferrari 308GTS is the more desirable carburettor model and is described by the vendor as presented beautifully in its original colour of Rosso Corsa with black leather with red inserts and new red carpets; this is certainly the most iconic and striking of colour combinations. The Ferrari 308GTS is quite rare and the most powerful of all the models.

The car has had little use since its import in 2014 but was given new timing belts and a service in January of this year which included re-commissioning the brakes and cleaning the carburettor jets. It is supplied with the US title, a NOVA which confirms the import duties have been paid, a UK MoT test certificate which expires in August 2018, the handbook and the original service booklet. With only 69,000 miles on the clock, this lefthand drive Ferrari 308 GTS is a very usable car which one can easily settle into driving. This is a great example with the right specification which will benefit as future values rise for the purity of Fioravanti's original concept. Since the service the car has developed a minor fault with the electric windows which are currently not operational.