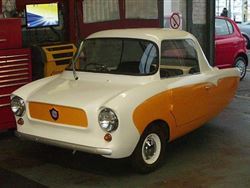 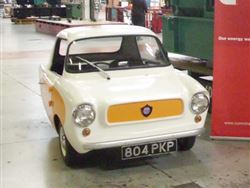 In October 1960, the Frisky Prince was shown at the Earls Court Motor Show. This was basically a re-bodied Family Three with front hung doors. Around the same time, a deal was done with a company called Middlesbrough Motorcraft and kits to build your own Frisky became available from them. Anthony Brindle, who had become joint managing director of Frisky Cars took part in a publicity run attempting to visit five European capitals, Paris, Luxembourg, Brussels, Amsterdam and London not spending more than £5 on fuel. A four wheel version of the Prince was announced for 1961 but never reached production. When Petbow, the builders, shut their doors, all the body shells and most parts were broken up or scraped, however some parts went to the Frisky Register.

This Frisky Prince is one of only 2 known to exist, one in the USA and this one in the UK, and should not to be mixed up with the Frisky Family 3. The engine is an Excelsior Talisman twin of 328 cc, and with  four speed gearbox with reverse. The body is fiberglass.

The car has had a total  engine and gearbox re-build, a new petrol tank, new glass, tyres, a new wiring loom, and all new nuts and bolts. The vendor's father bought the car new in 1961, then in 1963 bought a Trojan bubble car, so the Frisky was laid up. When his father passed away three years ago he set about getting  in back on the road. He found the Frisky Register and they helped him with the project. The Frisky has a full years M.O.T. It comes with original hand book and some paperwork. The Frisky was made at Petbow, Sandwich Kent, which was bought out by Cummings Power Generation, a large international company. The vendor works for Cummings and has had lots of help from them in renovating the Frisky  prince

As far as is known, a Frisky Prince has never come on the market, so this is a great opportunity to own a very rare car, a one family owned car.